There's nothing better than going to a Razorback game in Little Rock.  Well, other than the super-crowded stands where somehow your one seat becomes 1/2 or 1/4 of a seat, you're sweating and sticking to your child, the person behind you continuously knees you in the back........but I'll get to all of those details later.

This was our very first game with all THREE of our little ones.

And YES, we called for some extra hands.  And we were so HAPPY she said YES (thanks so much Miss Makenzi!!)

So, with the vehicle loaded down and looking like the Beverly Hillbilly's -- off to Little Rock we went.  It was hard to imagine that we were leaving and coming back on the same day.  How in the world can we look the same when leaving for one day OR one week.  I haven't quite figured that one out, but it always seems to happen...

First stop:  Arkadelphia.  Doggy drop-off.  That got rid of a minor bit of chaos.

I'm very fortunate to have a husband who is a great driver.  He can weave his way in and out of just about anywhere.  You know.....he's the one that stays in the left lane as long as possible and then jets over right before the exit -- passing up ALLLLLL those people waiting in line.  Oops -- hope that wasn't a secret.

We arrived at our lot and there were plenty of spaces left.  We found a great place with lots of grass and shade so we could set up our canopy and the kiddos could hang out and run around.  The extra shade was nice as well -- it was getting pretty toasty.

We met up with our friends, the Bobo's, and got things set up.  The girls needed a little bathroom break, so Jill and Makenzi took them over to the zoo.  (we try to avoid the port-a-potties at all cost)  They were actually letting people in FOR FREE from 10-2.  Pretty cool!  The girls were able to see the new penguin exhibit and several of the other animals.

We also took the little ones to see Tusk.  It was a little jaunt from our parking spot.  We managed to get there and back in one piece.

We ate lots of yummy food and were able to visit with friends we hadn't seen in a while.

Time to go in......time for me to put on 25 yards of fabric and strap Miss Bean to my body.  Time to sweat even more.  The first quarter was somewhat calm, "cool", and collected.  Bean was fine.  Sugar was entertained. Spice was entertaining our neighbors by shouting out any and every phrase she heard (like "go hogs", "you can do it", "defense").  Luckily, we didn't have anyone shouting vulgar obscenities close by or we would have been in trouble!

Bean is our first and only pacifier baby.  Sugar and Spice never would take one.  My experience is lacking in this category.  There are times I leave the house without one....BIG mistake.  There are times I've wished I had one of those pacifier clip things that keep it attached to the child when it pops out of their mouth.  THIS was one of those times!!  Bean was getting ready to eat, a little on the fussy side, and the paci just wasn't staying like it should.  My hand was cramping from trying to hold the paci in her mouth, while the other hand was in a constant battle with Spice to keep her from tumbling down the bleachers.  We have great seats and I love them, but for some reason, OUR row was the up and down row.  We are on the outside seats, so up and down we went each time as well.  One time I thought I would try and make it "easy" and just swing my legs around to the side.  My hands dropped down for support and OUT popped the paci!

Down below it fell........the poor guys in front of me!!  I had them all looking in desperation for the beloved paci (did I mention this was the ONLY one we had with us?)  Where we sit, the area below the stands is slanted -- everything rolls to the bottom......or somewhere.  SO, I found our nice gentlemen helper wearing the yellow vest -- batted my eyes in the best mommy-fashion I knew -- and had him asking the guy on the other side of the fence if he saw our neon yellow and red pacifier.  After a few strange glances -- THE PACI WAS FOUND!!  YES!!  (and yes, I cleaned it off best I could).

That bought us a few more minutes.  Oh, and during this time, we discovered that we left the one BOTTLE of mommy milk out in the car.  NCAA no longer allows you to leave the stadium and return.  In this case, there was no way I could feed Miss Bean in the stands.  Hooter Hider or no Hooter Hider.  It looked like an early exit for us (which....at this point in the game -- the Hogs had it made in the shade).

Bean let me know it was time to exit.  We headed out and were waiting on the others.  Meanwhile I see the INFORMATION booth.  I decided I would take a chance and see if they had an "assigned" place for nursing moms (I didn't think there was much of one either....War Memorial is pretty old).  The man I spoke with said "no" pretty quickly.  Then he thought for a minute......"oh, we do have a seat in the bathroom".  At first I thought it might be possible.  THEN I understood him to mean the ACTUAL POTTY seat.  After almost gagging -- I politely told him NO THANKS!  He thought once more -- and brought me into the office to feed Bean in what I think was one of the box offices (the blinds were closed at this point).  SO, I told the situation to the fam once they came out, they voted to stay, and off Bean and I went to this tiny narrow room.  After unweaving this super-long piece of fabric and getting us untangled -- mission accomplished!  Only one or two people walked in on us......it's funny how embarrassed people get and they can't even see anything!!  WHATEVER!

We were good to go!  W enjoyed the rest of the game -- cheering the HOGS on to victory!!

Other highlights of the game:
WHOOOOO PIG SOOIE!!!  GO HOGS!!

headed back from the zoo 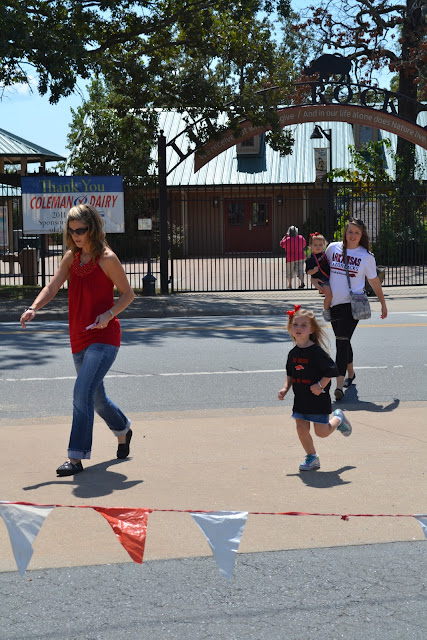 burp cloth: totally cute gift from a friend; onesie: super-cute made by the talented Bebe (as in my mom....a designer, but not Bebe the clothing store -- ha!) 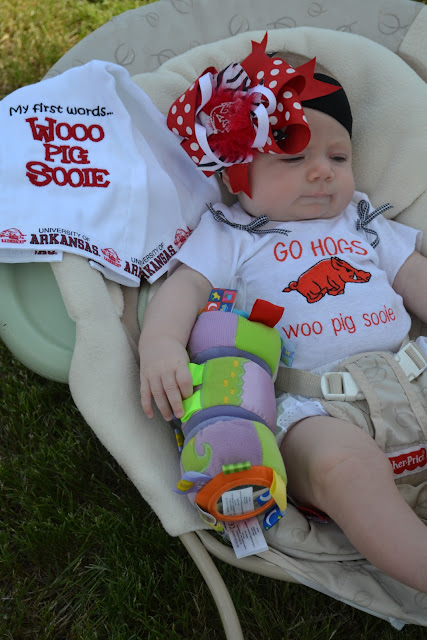 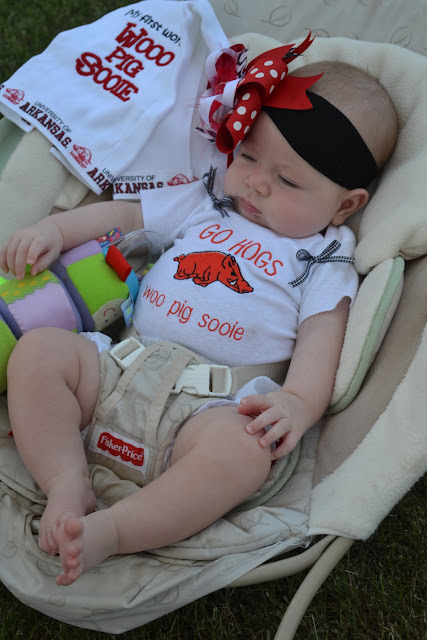 my little Spice...for some reason felt the need to walk around all day with this medal around her neck 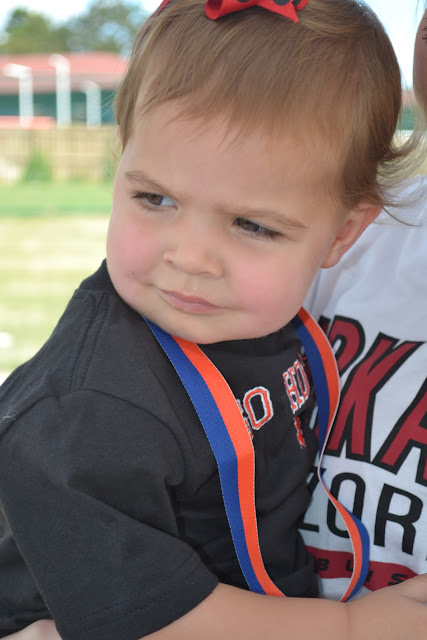 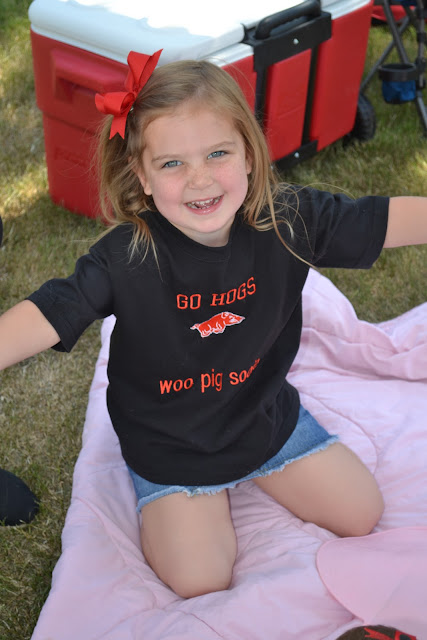 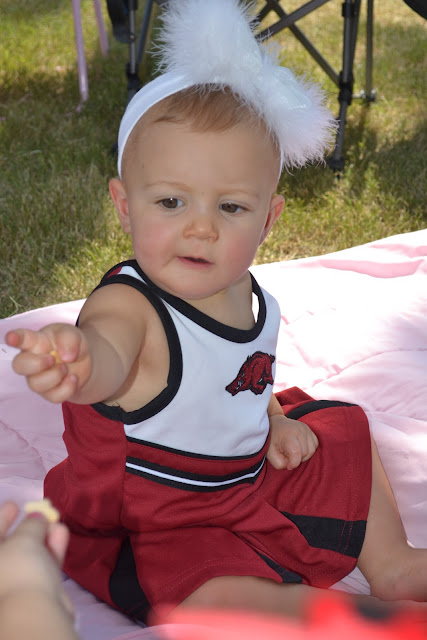 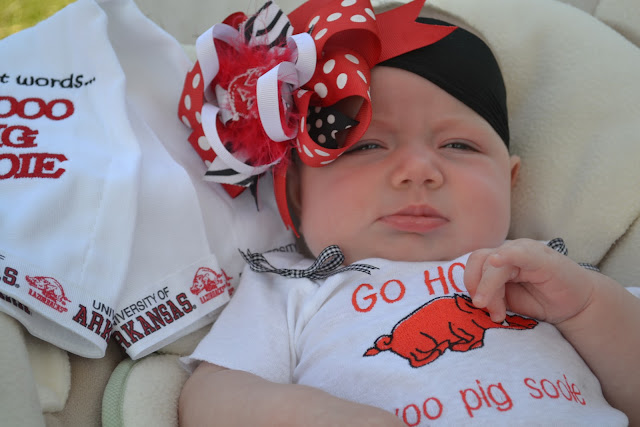 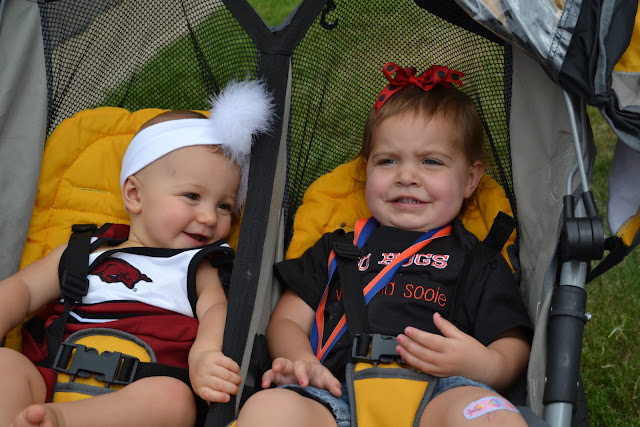 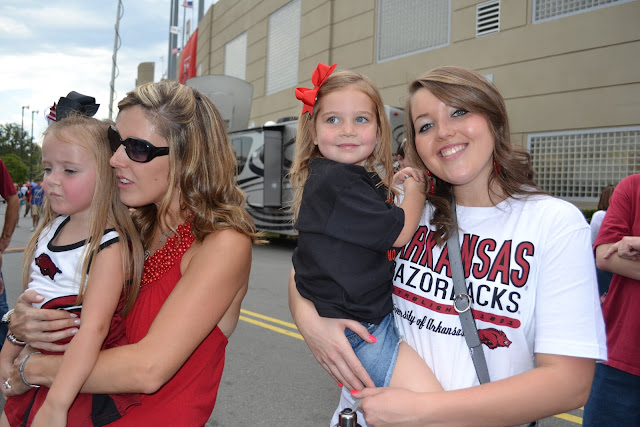 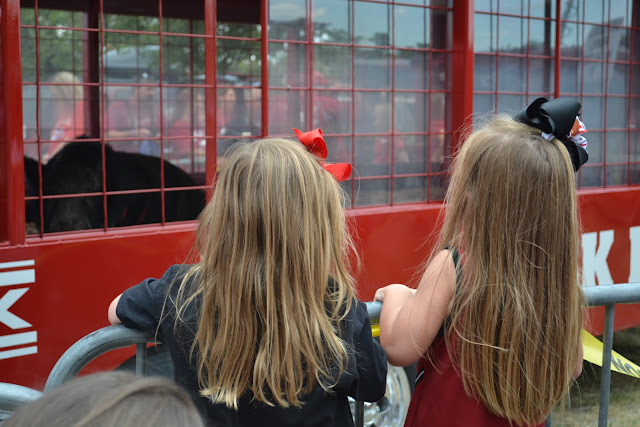 Spice was not so sure about that hairy HOG! 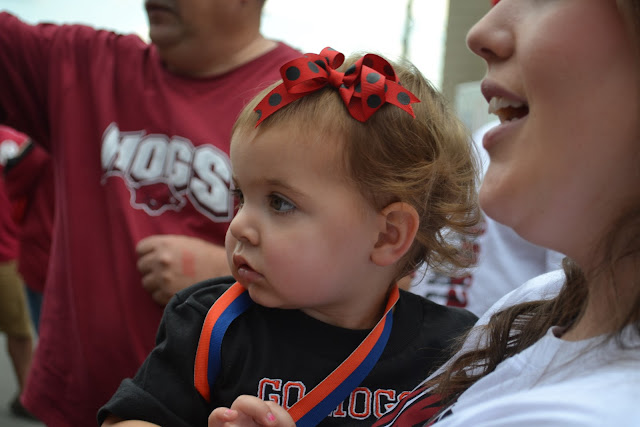 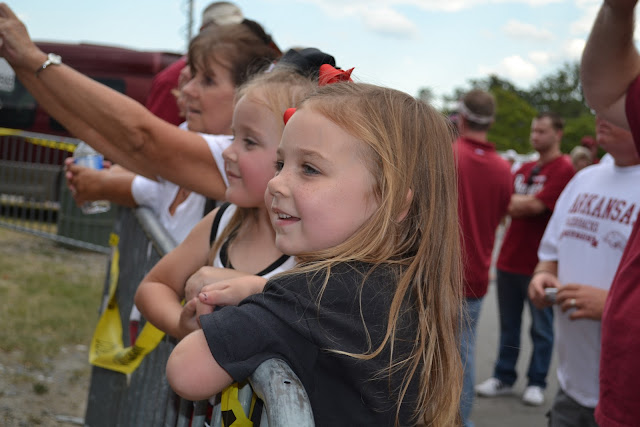 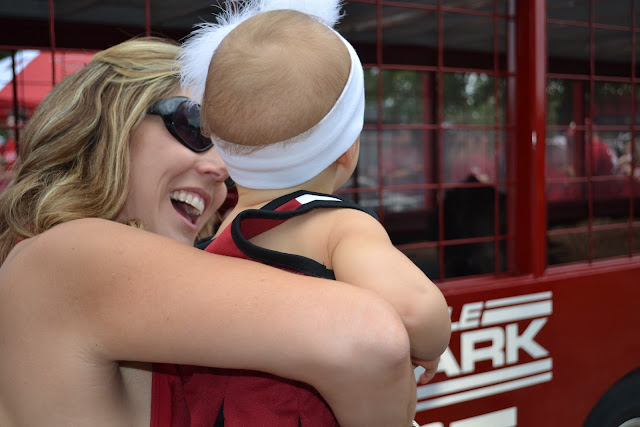 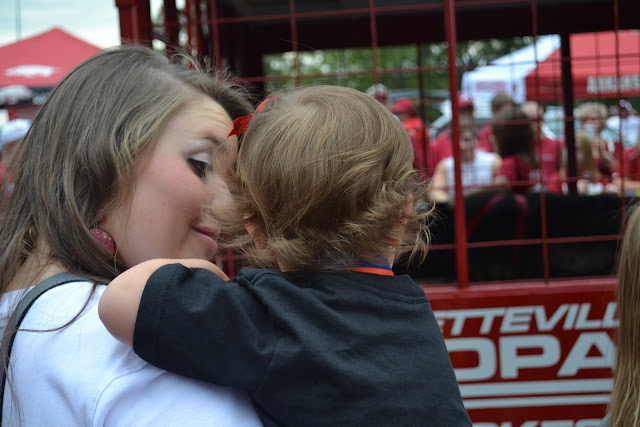 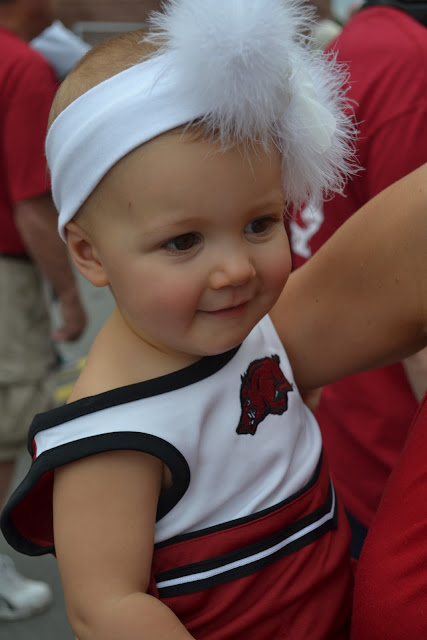 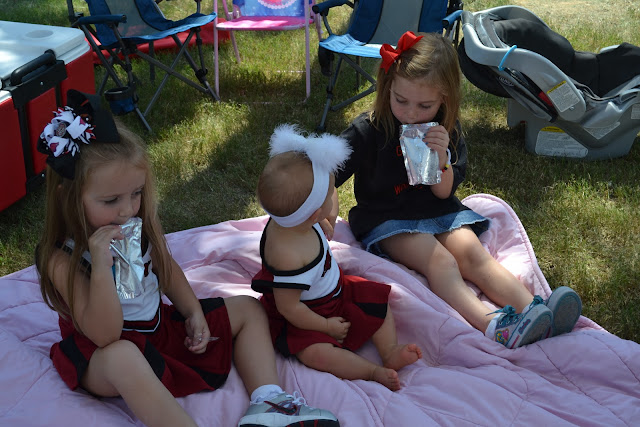