My first triathlon was quite the experience. I can definitely look back now and LAUGH. And I have many times since.

It was fun. It was trying. It was fulfilling.

I'm a swimmer. Not a great one, but I can hold my own. Someone once told me that I would never make it in the world of collegiate swimming. So, of course I had to do it.

I went to practice everyday. On time.

I ate many a wake. But, I hung in there.

I made some of the best friends I'll ever know.

I learned about dedication, commitment and discipline.

All that to say -- after I was finished with my four years of eligibility, I needed another outlet.

I found the world of multi sport.

Swimming, biking, and running...all wrapped up in one fun package. Oh yeah -- that sounded right up my alley.

I had gotten into doing a few 5ks here and there. But, the tri thing -- that really caught my attention.

I signed up for my first race the summer of 1999 - the DeGray Sprint Tri.

I had my trusty MOUNTAIN bike (and for you that know or are considering -- NOT a good idea!), and very little tri gear and headed out to the race. A good friend of mine that I swam with was doing her first race as well.

I can remember being very nervous. Very excited. Very....everything!

Several years have come and gone since, but what I DO remember is....

the swim went pretty good (of course -- that was my strong point!). The bike...I remember my friend's boyfriend being IN the transition area (which I guess they weren't enforcing that day, but it is illegal for non-race participants to be in the transition area) and literally helping us FASTEN our helmets! Oh my...I'm no expert now, but that thought makes me giggle every time.

Another vivid memory is that during the bike portion of the race, while I was pedaling with all my might (and on a mountain bike -- it took just that -- MIGHT!) I ran over some metal object on the shoulder of the road and POP!!

A rush of disappointment --

All the training, all the anticipation...

I had a bike bag attached to the bike filled with tire tools, a patch kit and a spare tube. Did I have a clue what to do with it?

I walked my bike toward a group of volunteer Boy Scouts. Their group leader asked if I needed any help. Unfortunately, they did not have the know-how to fix my fat tire, and I was left to wait for the pit crew to come and pick me up.

The roadside crew showed up, and I was ready to pile in and pout my way back to transition.

I guess the man driving the van could tell I was disappointed. He asked to check out my injured tire.

After assessing the situation, he said he could probably patch me up good enough to get me back so I could finish the race.

Heck yeah, I told him!

By the time I was ready to take off -- I was totally aware that I was and would be the final person to cross the finish line that day.

I came to finish my first tri, and that was what I was going to do.

My parents were a nervous wreck when I returned to the transition area. They didn't know what had happened to me, but they knew I should have made it back before then.

Anyway - off I went, up, up UP Iron Mountain for the the first half of the 5k. Then, down, down DOWN the mountain to complete the race. I'm no speedy Gonzales, but I had yet to experience the feeling of the ambulance being right on my tail.

So, (stay with me now - almost done) on the final stretch, I could hear the music and the crowd at the finish line. I turned the corner for the final .1-.2 mi of the race.

AND THE CROWD GOES WILD!!

Or, at least that's what I heard and how I felt.

They were cheering for ME!

I made it to the FINISH!

It was a pretty cool ending to what I thought was going to be quite a disappointment.

AND, it was the beginning of what has become a true PASSION. 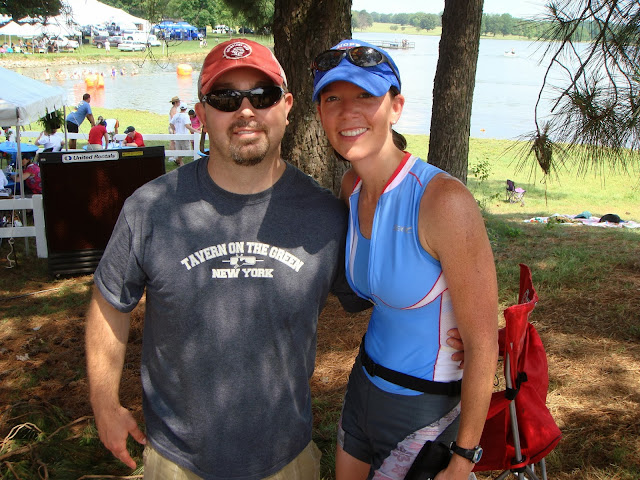 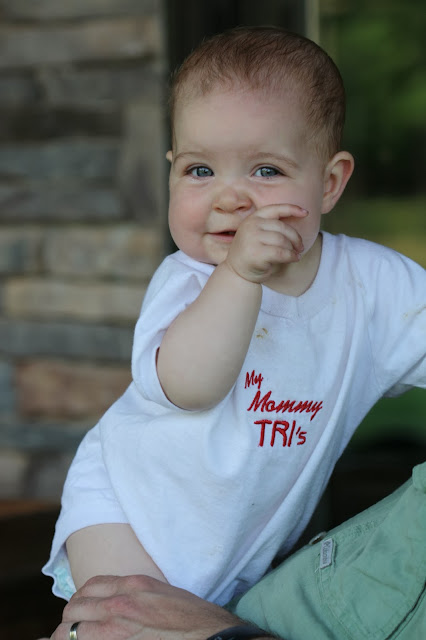