This mama has NOT done a very good job with documenting her milestones.

I have heights, weights, and percentiles scattered on appointment cards in this drawer and that folder. I have snapshots and iPhone videos of her flying by in action.

SO, let me tell ya a little bit about this sweet child of mine.

This baby girl LOVES her sleep.

She has been a good sleeper from the word GO (goodness knows once I post this that will all change...).

She is at a crossroads.

She LOVES to be with her sisters. She wants so badly to stay in their room, but just can't make herself settle down enough to actually SLEEP.

She "turns herself in" by coming to get the hubs or me. If she's super-tired, she will hold her arms out and go without resistance. If she's playing the game -- she comes and peeps in and makes sure we see her, then she RUNS back down the hallway squealing the whole way. These last couple of weeks she has been especially reluctant. It takes her a few minutes to settle down, but she doesn't stay fired up for long.

I haven't even told you that we survived getting rid of "pappi" (her pacifier) fairly painlessly. I couldn't believe it. Still can't.

I wish I could say I played a role, but I really didn't. Our wonderful babysitter, Ms. P, had her taking naps without it. She would tell her, "pappi's gone", and after a few inquiries Bean would be fine and drift off to zzzzzzland. During that initial transition, Bean would still want pappi when she was with us. I thought to myself, "this is NEVER going to happen". I think in part, I didn't want it to. I didn't feel as though I was ready. Having her pappi was a big part of her baby-self, and I didn't want that to be gone. No more babies at the Coffee House, so I selfishly wanted to cling to anything that kept her a "baby". That, and the fact that I know a good dentist...(just kidding, Mom)

I don't remember the exact day (see, just another example of poor mommy documentation), but it was bedtime and I thought...I'll try laying her down with out pappi for the night.

We did our normal routine, and then it came time for me to put her in bed (she is still in her crib. Yeah - not giving that one up until she is climbing out of that puppy!)

We looked in the regular spots and there was no pappi. No pappi here. No pappi there. No pappi in her bed. I went with the story of, "remember that we talked about the pappi fairy coming and taking all your pappies to babies that need them? Well, it's time. You don't need pappi anymore".

I kept talking her through it. I distracted her a bit with story time. We read a couple of books, and then it was TIME. Time for the TEST.

I bundled her up in her sleep sack, handed her lammie (I'm not cruel, folks. She can have lammie as long as lammie will last. At at this rate, she could be limbless in a few months) sang her a song, and layed her down.

I literally had tings of pain in my heart, people. This was tough on a mama! I declare, as I layed her down that little one said in the tiniest of voices, "I'm scared".

I about lost it.

I was about to search until I found a pappi and give it to my sweet, sweet baby.

She didn't make a sound.

she slept ALL night.

When I opened my eyes and realized what had happened, I immediately said a prayer and thanked God for such a blessing. I'm serious -- I've heard the nightmare stories. I was SO thankful!

And we haven't turned back since!

That's not to say that she has never, ever asked for pappi. She has. But, she has never NOT gone to sleep because she didn't have it.

She still loves lammie, but she doesn't need her quite as much either.

They kinda went hand-in-hand, and now she just likes to have her for sleeping.

She talks in the most precious voice, in the most broken way. I just love it. I'm one of those mom's that lets her kiddos say a word the "wrong" way because it is SO super cute. (I know, my speech path friends around the world are cringing. I promise I wouldn't let her do it until she's sixteen...maybe ten or twelve. Usually by the time I remember to document the cuteness they've outgrown it.)

Right now, one of my favorites is "Don't hike it" (I don't like it). She'll eat 3/4 of a banana and decide she wants something else. This is usually when she lets me know she doesn't "hike" it.

She followed in her sister's footsteps to say "dude it" and I just adore it!

AND, hot off the press: Bean was walking around with a little Barbie computer. Babe was over at our house watching the girls and asked Bean what she was carrying. She replied, "my POOTER". Of course, we had  to have her say fifteen times more. It was precious. I realize "pooter" is not normally looked upon as the greatest of words. But, when you have precious little lips that pooch out, and sound totally cute while saying it...you can pull it off. She did exactly that.

I may not be able to relay the cuteness in this one, but she when she gets excited she can't verbally keep up with her what she wants to express and it comes out as jibber jabber. She wants to tell us she's been a good girl by napping or sleeping well and she runs up and says "sdfj ljjiwe jjfsjfl jslkdfjlsjf kjk fkj", puts her little hands near her face and leans her head over likes she's sleeping and says, "hawshoo hawshoo hawshoo" real fast. Okay...so,that may just be one of those you-had-to-be-there type of situations. So glad that I am.

She loves baby dolls and her big sisters.

She a daddy's girl, and a mama's dream.

I love her to pieces and I'm so thankful to have the chance to get to know this little person.

This is a tiny glimpse into the life of Bean with pappi and lammie...
(No, lammie is not a dog toy. She has loved her into that shape. Lammie has a very, ahem, unique smell that only Bean can love. She's been washed...well, on occasion. Bean likes to rub her nose with Lammie's ear. Sometimes Bean rubs her hands and feet and tummy, too. She makes this humming sound at the same time. It's a trip!) 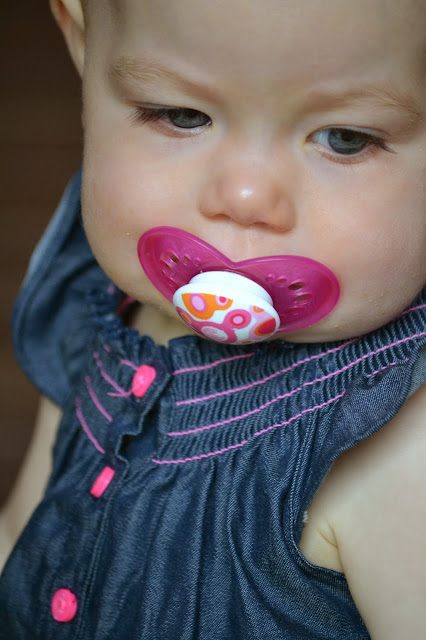 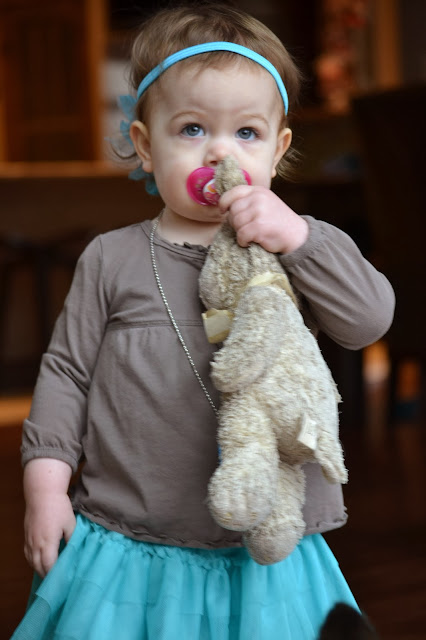 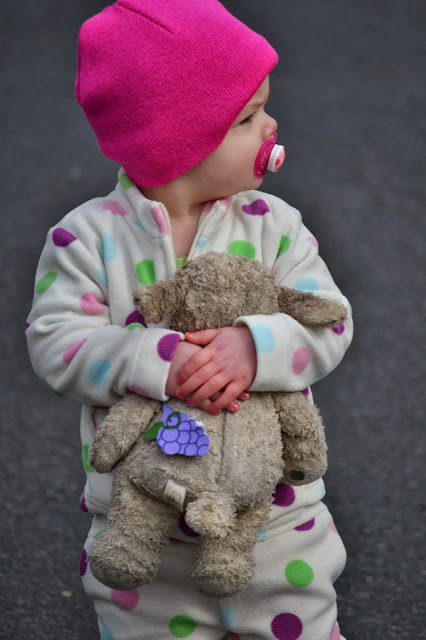 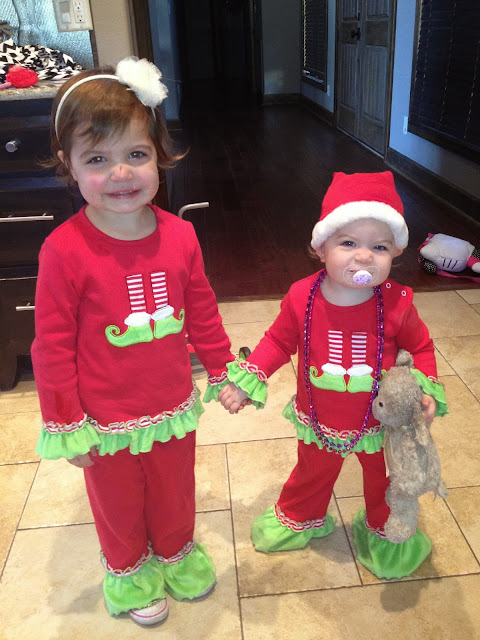 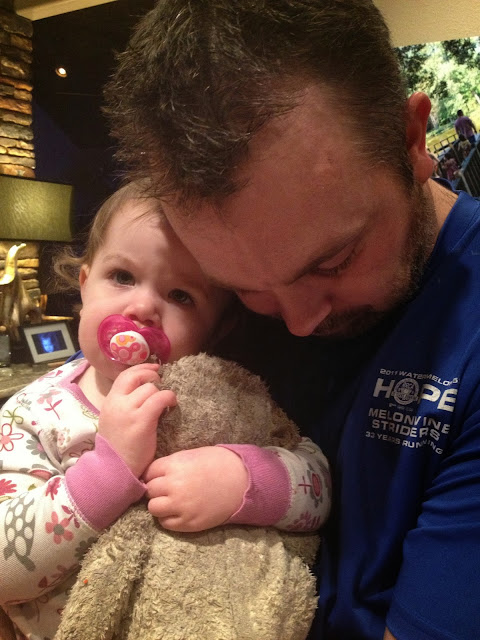 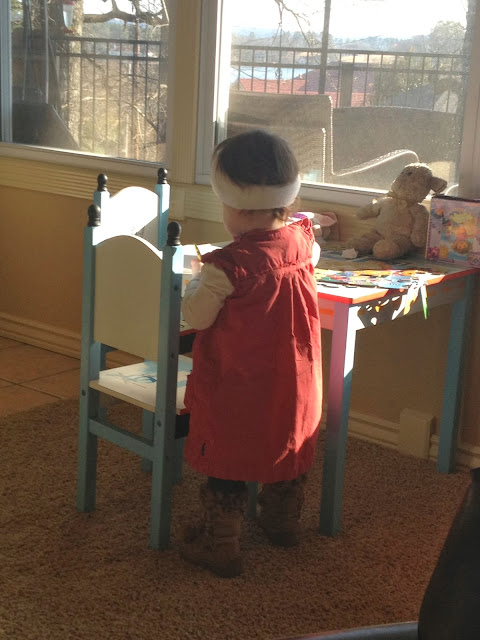 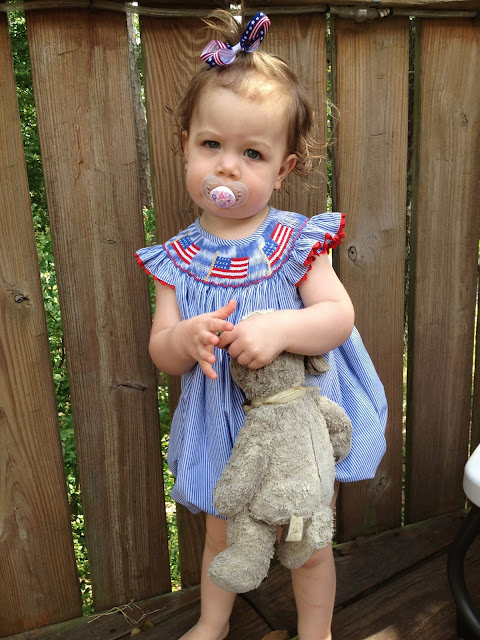