Darby Kate is 15 months old today!! I think she's entering the "terrible two" zone a little early. (I know, Bebe, there is no such thing as terrible twos!) Anyway -- "No" is really becoming a huge part of her vocabulary. She even said "no, mama" several times today. She's been fittin' left and right, up and down, and for reasons I can't seem to figure out. The funny thing is that one minute she's screaming and crying, and the next she's laughing and squealing with delight. She doesn't seem to hold grudges (I was told that's the case) -- so I'm really glad of that. Because there are definitely times she gives me looks, and tries to pinch me so hard that I don't think she'll ever get over being upset with me!! And even though times like these make my blood pressure rise -- She brings it back down with a super sweet hug or look.

She's running -- for real! And, she's pretty quick! I hope she continues to enjoy running -- she'll be ready for the Melon Mile come August. She loves to dance and sing. She holds her mouth open and shakes her head from side to side for her singing face -- I need to get it on video. She says "bye" a lot more now. She still waves real big, too. My blogging has been fairly sporadic lately, so forgive me if I repeat myself. I keep a journal, too -- so, sometimes I think I've written stuff I've blogged and vice versa. So -- I can't remember whether or not I've mentioned that she learned to drink through a straw a couple of weeks ago. We were both pretty excited about it. We hadn't worked on it too much -- I guess I always had a sippy cup with us, and we just used that. But, once she had it down -- she preferred drinking through a straw to the sippy. This will make restaurant times a little easier. She is giving super big hugs and sugars these days. Loves to play with other kiddos, and tackle them and hug them. Basically, she is a blast and we are loving every minute of it! 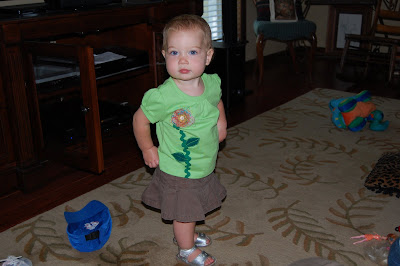 CHEESE (or as she says "eese") 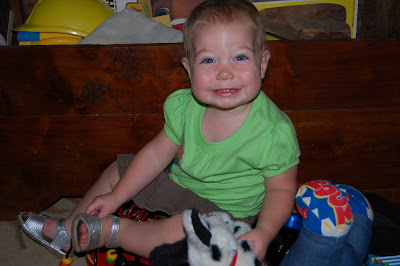