Okay......for those of you who actually read this -- it's gonna be a long one. For those of you who prefer just to check out the pics -- I will go ahead and apologize now. I've decided I can put this off no longer. I think about blogging everyday, but then I tell myself....I need to edit the pictures first. I need to blog about this before I blog about that. I need to stick to my "weekly" posts. Well, since I've already blown the weekly thing -- I'm going to go in the direction of -- well, to be honest, I'm not sure.....I'm hoping just to do a better job of updating period. I may not post pictures every time, but I feel like I'm not getting down way too many of the cute things the girls are doing. I do keep a journal, but for some reason.....this one is mostly directed towards Jorgia. I did the same thing for Darby Kate's first year. Who knows....another one of my scattered brain ideas.

SO many things have been going on since my last post. Don't worry. Nothing major -- just everyday life busy things. Every time I think life is going to settle down a bit -- another activity or event pops up, and we just keep going and going. Summertime bedtimes get pushed back later and later. If we want to hang out at the pool once Trevor gets home from work -- it's usually 8 or so before we get in. THEN we attempt to eat supper and get the girls tucked in. I know -- it's a time management issue on my part.....needs work.

Darby Kate's 3rd birthday party consumed SEVERAL days a couple of weeks ago. I do refuse to post much about that until I get the pictures somewhat organized. It just deserves to presented as one package -- it really was cute. The Luau I had imagined ever since I knew we were going to have a pool in our backyard finally came to fruition. And none of it could have taken place without the help of Trevor, his parents, Clancy, my parents, Miss.......and several others. I have fun planning everything...it's just when it comes to executing it.....I need LOTS of help. My head was literally spinning that day. I would try to complete one task, only to turn my head and see four or five other things I needed to get done. This usually equaled to me accomplishing NOTHING!! It seemed as though 48 hours before the party was non-stop, BUT, when it came time to tell people when they asked, "who made the cake", "who made the cupcakes", "who made the cookies"...the answer was never "I did". SO, what did I do? Not sure, but I had to have done something -- I was tuckered out after that shindig!! A big THANKS once again to all that helped -- I could NOT have done it without you!! :)

Sweet Baby Jorgia is coming up on her 11 Month B-day. And, as I say each time, I cannot believe it. She is so beautiful and fun. She is sleeping through the night (YES!). She is signing "more". She is eating table food (and lots of it!). She loves to play with her big sis. She is crawling EVERYWHERE and is now standing independently at times. She cracks me up when she does this -- she'll stand up for a few seconds, then plop down on her little bottom. Then, she just turns and grins -- she is so proud of herself! (Mama is too, Jorgia!!) She crawls super duper fast. She still eats any and everything she finds on the floor (dirt......bugs......grass) She enjoys playing in the pool. She is going through a little biting phase (it is a phase, right?). She likes to dance. She loves to ride around with DK in their truck. Hmmmmmm......I guess I can add other stuff on her actual 11 month post. I truly love and adore this baby girl. I do my VERY best to look at her and cherish the special times we have each and every day. I'm still nursing her, and I watch her precious face and big blue eyes every chance I get. I know we will never be as close as we are these very days, and I don't ever want to take that for granted. I don't want to sound as though I don't have times when I get frustrated, or need time away, or whatever. BUT, I do try and appreciate the short days I have with these precious babies. I realize there are many out there that are robbed of this privilege, and I want to truly take everything in.....

Now to Miss Darby Kate. Oh this little angel....she keeps me in stitches, on my toes, off my rocker, basically, I experience every emotion in the book when dealing with this little one. That's one way I know I love her more than life. I believe the people you love the most -- make you feel every emotion possible -- from one end of the spectrum to the other. It's because you care SO much -- you feel your greatest joys as well as greatest sorrows. I can't believe we have gone from one and two word sentences, to carrying on little conversations. She comes up with new stuff everyday. Stuff I have vowed to write down, but often times don't. She is so witty, smart, crafty, funny, talented, athletic.....and the list goes on. I love her, love her, love her. She wants to do everything I do. It's an honor, and sometimes on the inconvenient side, but once again, I try and remind myself that I need to appreciate these times for they will be short lived. She continues to have a love for books that never ceases to amaze me. She can say her abc's and count to at least 14 by herself. She can sing "Miss Mary Mack" all by herself, and often insists that it's by herself! She loves to run and dance. She loves to run around naked (oh yes, she does). She loves to swim. Loves to "help". She loves her baby Jaja (Jorgia) and she tells her often. She loves her "plip-plops" and wants me to tell her each time if she has them on the right foot. Our bedtime routine now consists of: brushing teeth, washing feet and hands, going potty, putting on sleepsack, singing "you are my sunshine", humming it, singing it, her saying "one more song", doing the same thing again, I lay her down in her crib (yes, she is still in her crib), she then wants to sing "Miss Mary Mack", I cover her up with 3 different types of covers, I turn on her ladybug, she wants her babies (she has lots in the bed, but she wants to ask about specifics...."monkey, tiny hair, baby Stella...etc."), THEN for some reason, after several hugs and sugars -- she tells me, "mommy, Z is for Zebra". It is after ALL of that, that she is perfectly fine and ready for a good night's sleep. A little excessive some might say, but it works for her........and for me........most nights! :)

Trevor was recently diagnosed with Lyme Disease. I know. Scary. BUT, thankfully, we caught it in the early stages. Fortunately, we were aware of tick bite he had gotten not too long ago. Shortly after, he began having symptoms of fatigue, headache, itching all over....symptoms that all pointed to some type of tick-borne illness. After putting off going to the doctor for several days, he finally went in for some blood work. Around a week later, the results came back. You would think that would be enough to keep that boy out of the woods! No, not really, he is much too much of an outdoorsman for a little Lyme disease to keep him from going out amongst Mother Nature's little beasts. Yuck -- I dislike those little arachnids VERY much!! I will say, he stayed pretty tough during the whole process. He had some rough times, but continued to work and do things he does each day. He's a great daddy and wonderful husband -- we are so blessed!

As for me -- not much to say. I am still training for tris -- have one coming up next weekend. My training has decreased somewhat, with all the other activities going on, plus the heat -- I like to do my training in the morning if possible. I am looking forward to teaching one class at the community college in the fall -- it will be something new and exciting. Speaking in front of a class will be a challenge for me, but the subject matter is something I enjoy -- so, hopefully that will help things to go smoothly. 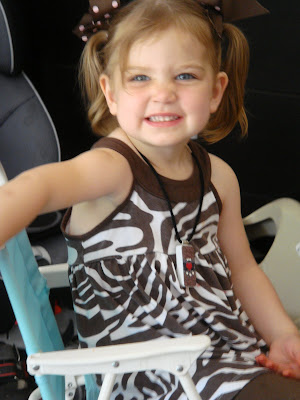 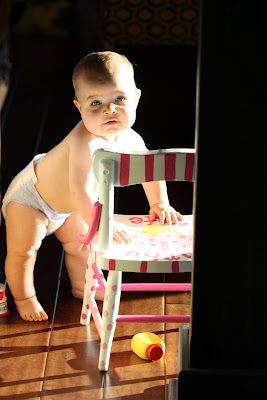 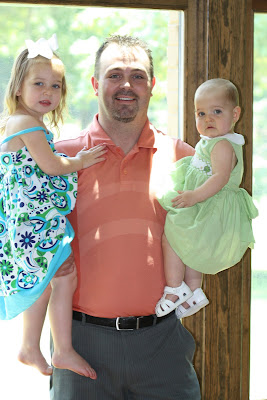