On the Mountain Top

I don't think I've ever slept this well while on vacation. I think I slept OVER eight hours! I was well rested and raring with excitement. While the hubs and I had discussed the importance of having all of the gear ready the night before, fatigue had set in, and we settled for the satisfaction of having things "generally ready".

I got up and showered and for some unknown reason felt the need to dry and fix my hair (totally pointless). Got the coffee brewing and fixed breakfast. I started putting on my layers. By 7:30 or so, I started getting the girls up and at 'em. After they ate their breakfast, we began putting on their layers.

The fussing began in FULL force.

The socks felt funny. The pants were too bulky. The colors were all WRONG!!

Those are just a FEW examples of the next 30 minutes we endured.

At this point, I was in total WISH mode. WISHING I had been smart enough to have my kiddos practice putting on their layers and hanging out in them some the week before we went on this trip!!

My dreams of a stress-free morning turned into PANIC mode and arriving about 5 minutes late to my PRIVATE lesson!!

Fortunately, my man Rich was patiently waiting. Rich was a great teacher for a first timer like myself. He was in his mid to late 60's and moved at a pace that I know my five year old handled just fine. But, that was perfect for my first encounter.

PIZZA and FRENCH FRIES (wedge position and parallel position for those who may NOT know) were the ski positions for the day.

I practiced up and down the most basic bunny slope with the carpets for most of the morning.

After a few million trips up and down the hill, I decided I needed to warm up. A cappuccino hit the spot! I sat inside with a gorgeous view of the slope. I was amazed at how many tiny tots I saw come racing down the mountain. I couldn't believe it! How could these little creatures with NO poles do things I wouldn't even dream of attempting. CRAZINESS!

I was also able to see SUGAR and SPICE file out from ski school. It was SO cute!! They had on their little helmets, ski school vests, tiny little skis....PRECIOUS!! I was one proud mama!!

In the afternoon, I made my first trip on the FIRST ski lift (I guess it's consider a bunny slope as well).

Let me just say -- ski lifts cause me GREAT anxiety. Almost any time I ever hear of someone getting injured (namely breaking their necks or backs) it's on the ski lift!! I realize it's often in the movies, but I know of some real-LIVE folks this has happened to!!

ANY-WAY -- needless to say I busted it many-a-time coming off the lift. I'm pretty sure I let the anxiety get the best of me. That, combined with what must have been a magnet on my backside, which attracted the lift chair, which LOVED to give me a swift kick in the derrière every time I made my exit!!

Things went pretty well my 2-3 tries on that slope.

I met up with the hubs.

He thought I was doing great! He said I was ready to go to the TOP!!

Cool! Well, sorta. I wanted to......but, I still felt pretty anxious. At this point, I had no desire for speed or steep slopes.

Everyone kept telling me, "oh, you're athletic. You'll be FINE!"

I workout. I try my best to eat a well-balanced diet. BUT, for all of the years of my life, I have NEVER been skiing. I think this outweighs athleticism at this point in time!! But, off to the top of the mountain I went.

The ride on the lift was a mix of emotions. I was thrilled to be going up with the Hubs. It was absolutely beautiful!! I was anxious as all-get-out...and that was literally just to get OFF the lift. FEAR was how I felt about heading DOWN the mountain.

Unfortunately, my first exit from the lift and entry to the top of the mountain was not as graceful as I had hoped. I slid my way (on my backside) to a stop, only to look up and see a couple from our crew witnessing my acrobatics. EMBARRASSMENT!!

Need I even go into HOW and WHO came up with the color coded slopes (blue, green, black, etc)? SERIOUSLY, folks? The greens for that day might as well have been triple black diamonds (if those even exist)!! And then, the Hubs tries to convince me that the BLUES are actually "easier" than the GREENS! I trust the Hubs. So, I follow. We head down a BLUE slope. The decline is dramatic. NOT something I would have chosen on my very first day of my ski life. But what goes up -- must come down. I wedged my way down without much event. Not bad. I can do this. All was well until fatigue set in. The internal and external rotators of the hip are a group of small muscles. I wore those muscles OUT!! And once that happened -- my legs would NOT do what my brain wanted them to do. And in all honesty, my brain was putting on the breaks as well (which did NOT help matters).

Poor Hubs. Poor ME!! I actually had a moment that I did not think I would make it down from there without help from the ski patrol. It was a (and this is NOT said in vain) coming to Jesus moment. I prayed. I fussed at the Hubs. I was on the brink of a MELTDOWN. The Hubs literally attempted to hoist me up on his shoulder. He was going to CARRY me down the mountain!! NO WAY, I said!! The Hubs finally calmed me down and talked me down every step of the way. I was so thankful for his patience, his determination, and his know-how. I'm tellin' ya...I was never so relieved to see that lift house...

TOTAL exhaustion. I felt relief, defeat, and accomplishment all in one.

We gathered up our two little ski bunnies and headed to the grocery store. 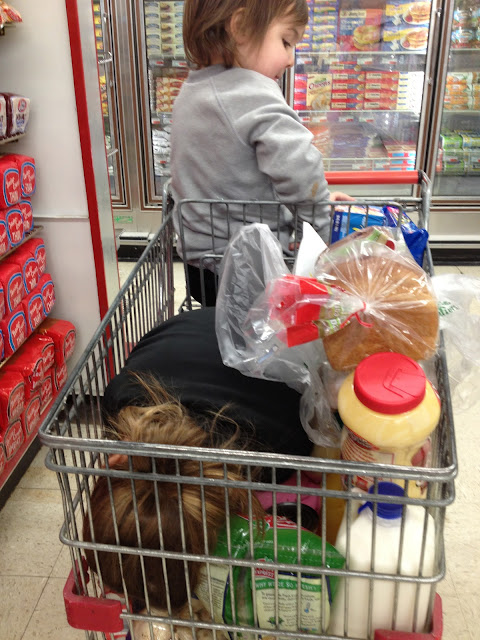 A low-key evening with dinner in the room was a great way to end a physically and emotionally DRAINING day!

But, even with all that...I was determined to make it back to the top.